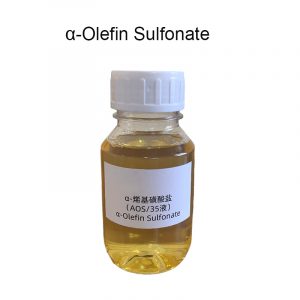 Sodium Alpha Olefin Sulfonate is an anionic surfactant, referred to as AOS. It has excellent detergency, foaming power, emulsifying power and other properties; it is very soluble in water and has strong calcium soap dispersing power and hard water resistance; it has good biodegradability, mild to skin; good compounding performance; easy to rinse.

Sodium Alpha Olefin Sulfonate (AOS) is widely used in daily chemical industry, such as washing powder, compound soap, tableware detergent and non-phosphorus detergent: used in shampoo, bath agent, cleansing cream and other cleaning cosmetics: for industrial detergent, such as oil field, mine, building, fire-fighting, textile printing and dyeing: it can also be used as air entraining agent and expansion agent in construction industry, and foam agent for fire-fighting.

There is little difference between AOS and LAS decontamination at higher temperatures and prolonged washing(eg, 60 °C or more, 1 hour washing). However, when washing at room temperature(10-40 °C, washing 10-29 minutes), AOS has higher decontamination power than LAS. Compared with LAS, AOS has a strong hard water resistance, so it also shows AOS advantages in areas with higher hard water.

Soap produces insoluble saponin in hard water, affecting the decontamination effect. Adding AOS can increase the solubility of soap in water, and the wettability and foam power of soap liquid at low temperatures also increase rapidly. AOS is added to soaps with sodium adipose as the main ingredient. The various characteristics of soaps are improved, foaming force is enhanced, hard water resistance is improved, flexibility is enhanced, and cracking is not easy.

Due to the large irritation of LAS, many washing products no longer use LAS as an active component, while AOS has low irritation and good biodegradability, making it a more suitable alternative. In liquid detergents, AOS has a greater influence on the viscosity of the product. The viscosity is improved with the commonly used fatty alcohol diethanolamide and Na-Cl. The effect is not ideal. The use of fatty alcohol monoethanolamide, amine oxide, betaine and NH4Cl can play a good adhesion role. Due to the characteristics of AOS in decontamination, hard water resistance, viscosity, etc., AOS has a wide range of applications in liquid detergents with high active components.

AOS is as mild as AES, and LAS and AS are much larger than AOS. Therefore, AOS has a wide range of uses in personal care products. AOS is extremely stable under acidic conditions. Normal human skin is weakly acidic(pH is about 5.5) and is suitable for using AOS as a component of personal cleaning products. The shampoo with AOS as the main active component is better than that with K12. Renso reported that the foam released by AOS was full of cream and felt like soap when washed. This characteristic is suitable for the washing habits of Chinese people. Therefore, AOS can be used in personal care products such as bath fluids, hand sanitizer and cleansing milk. Reference formula.

AOS has a wide range of applications in the textile printing and dyeing industry, petroleum chemicals, and three oil extraction and industrial cleaning. AOS can be used as a concrete density modifier, foaming wall board, and fire fighting foam. It can also be used as a pesticide emulsifier, wetting agent, etc..

Other package sizes are available upon request.